Social Apathy are a Black Metal and Punk band from Athens, Greece.

When Social Apathy contacted me via email, asking me if I was interested in having a listen to their debut album, Procreation so I emailed them back and said that I would love to and possibly do a review and play one of the tracks on my radio show, and they where grateful that i took the time out to check them out, but also for playing one of their tracks on the show.

Now, when I put the album on to fully listen to it, I was OK, I am not exactly a full blown fan of Black Metal, but I am a fan nonetheless, so lets see what you got. As I listened to the Procreation album, from my initial impressions, I have found that the band are pretty decent. On my initial run through of the album I could hear the Black Metal and I could also hear the Punk elements, especially on the guitars.

The songs that I have found that I liked or I have found interesting are: Shut The Fuck Up, Under Command, The Beast Inside, Reflection Of Decay, Empire In Flames, Tears Of Doom and Social Apathy.

Overall, I really like what Social Apathy has done with this album. At first, I was impressed with the music, but I wasn’t to sure about the vocals, but, with me I give any band etc 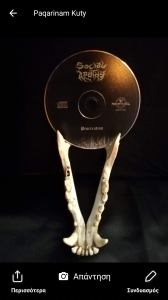 who send me music a chance to impress me. Over the course of the Procreation album, the vocals had grown me, as I thought about what genre the band are and what they were going for.

If you are looking for a new Black Metal band or looking for a band to check out, I would recommend that you go and check out Social Apathy on their record company’s Facebook page or the bands Bandcamp page.

I would give Social Apathy and their album Procreation a 4.5 out of 5 for a good album that has impressed me.