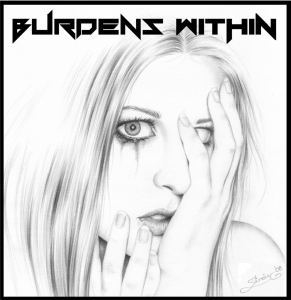 When I first heard of Burdens Within, it was at the beginning of 2019, when I was listening to The Rock Casserole on Digital Revolution Radio, and at the time, I was thinking OK, these are pretty decent, but, I want to hear more of them before I make my mind up on whether I like them. When I became friends with Mike Riley on Facebook, and got talking to him, he graciously sent me the Burdens Within album, I did play the album and played the odd song, in the last couple of weeks, and my first thoughts of the band being pretty decent were right, but the band is much better they are damn good.

Over the last few months, Mike has been listening to the Across The Pond show, and has suggest several bands for the show and helped to develop The Album Of The Week segment for the show, as I was toying with the idea making the segment a monthly part of the show. These were the reasons why I inducted Mike into the Headbangers Hall Of Fame, because of the support, not only to the show, but, to the music in general.

Now, back to the Burdens Within album. As I sat down and listened to it, I have to say that this is a good album, I was talking to Mike last night (May 9th 2019), and he asked me what bands does Burdens Within sound like, and I said that, The band is hard to pin down. but I had the chance to think about it and I said that the band had hints of Marillion and E.L.P. on some of the tracks, as they do have a Prog Rock vibe to them, and on other song they sounded like Iron Maiden, especially on the guitars, as they have a hint of Dave Murray, Janick Gers and Adrian Smith, and he was happy that the band was likened to Iron Maiden.

Now the songs on the album that I either found that I liked or found interesting are: Bruised, Dead End Town, The Devils Due, The Great Deceiver, Lets Party, How Would You Feel, The Illusion, You Could Of Listened, Re-Animate Me, How Would You Feel (Acoustic Version) and For What It’s Worth (Buffalo Springfield Cover).

Bruised is the first track off the album, now this is good track as it has some good guitars and riffs, the vocals are really good, this song takes me back to the late eighties and early nineties, as the overall sound of it, reminds me of the Hard Rock bands of that time. Dead End Town is a really good song, as this shows that how good Burdens Within are as musicians and writers, this song is heavy guitar driven song that any Rock will like. When I first heard The Devils Due, I thought I could hear some Prog Rock at the beginning, and after the intro the heavier Rock kicks, and it continues throughout the song, with some Prog Rock elements.

The Great Deceiver is another good track from the band, on this track, there are some sweet guitar work, as they are good and heavy and there is some cool riffs, the drums and vocals are on point, as they add something good to the song. Lets Party is another good track, that will get you moving to the front of the stage, and totally rock out, as this has an energy that everyone will like, as the drums and guitars work really well together, and there is some cool riffs, and the vocals are on point. How Would You Feel is a slower track, and is more – to me – of a ballad, there is an acoustic version, but I will get to that later, I like this track, because of the slowed down pacing of the guitars and drumming, I also like the haunting riffs from the guitars. The intro to The Illusion hints at what the style of song that the band is going for, as it is similar to How Would You Feel in its pacing, but it does some heavy elements from the guitars and it is also another good song from the band.

You Could Of Listened is a cool track, as it has some good solid vocals, coupled with good guitars and drums from start to finish. Re-Animate Me is a more of a faster paced track, which is ideal for people who like to get in front of the stage and Rock Out, as this is another track that will get you moving, there is some sweet like riffs and some good shredding. The acoustic version of How Would You Feel, now it is always good to see bands change it out a bit, especially if they do an acoustic version of one their songs, as this shows that they can say that we can do other styles other than doing purely Rock or Metal, now with this acoustic, as I really like the combination of the vocals harmonies and the guitar. When I first heard For What It’s Worth (Buffalo Springfield Cover) the last track of the album, I was thinking, I have heard this song before, then about a third of the way in, it dawned on me, I remembered I heard it back in the nineties, as it was a pretty big song, and Burdens Within has a really a good job on covering the track.

Well, overall what can I say, Burdens Within have created something good here with their self titled album, from start to finish, they is something for everyone on this, and I would highly recommend to anyone to check this album out. If you are into the Hard Rock genre or if you want to get into a good Hard Rocking band, then you should go and check Burdens Within out on their Facebook, Instagram, Twitter and Reverbnation pages.

I would give Burdens Within and their self titled album a 4.5 out of 5 for really good Hard Rocking album