In recent years Italy has produce major music talent within the Rock and Metal genres, for me in the last three and half years, I have reviewed over thirty five bands from Italy, such as MaterDea, We Have The Moon and Mistheria, just to name a few of them. When Agony Face sent through the CXVI Evolving Discharges album, my initial thoughts of the album when I played it for the first time were, This is different. So when I did a little bit of research on Agony Face, I had a look on their Facebook page, it said that they are a Surrealistic Death Metal, and I was thinking, OK, I can hear the Death Metal, I can also hear other elements within the music.

Now, when I sat down to do this review, I put on the album to fully listen and immerse myself in the music that Agony Face have created. From what I hearing, I am liking what I am hearing. The songs that I have found that I liked or found interesting are: XXV The Ionization, XXIII Waffle, XXIII Connection, XXIV Mat(h) Bat(h) 3+3+3, XX Marrakech Prostitute, XIX Reality Check, XIX Mantra Of Sulphur and XXI Wandering Through Cerebral Paths.

XXV The Ionization is the opening track off the album, and it is a really good track for the opening song, I liked the orchestral elements of the song, the guitars are good, as there is some sweet riffs throughout the song, and the vocals are on point. XXIII Waffle is a cool song, as it has some heavy duty drumming, and there is some cool guitars. XXIII Connection is a pretty brutal track, with its drumming and guitars, the vocals are really good and on point, there is some cool quiet moments on the track, which are good counterpoint to the brutality of the song overall. 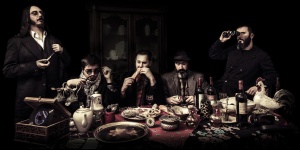 XXIV Mat(h) Bat(h) 3+3+3 is an interesting song, as it starts out as a Metal track, then the intensity of the Death Metal genre kicks in, especially with the vocals. there is some sweet guitar riffs, on this song there is a slight hint of Jazz on parts of the song, which I found interesting. XX Marrakech Prostitute is the longest track off the album, coming in at eight minutes, the band has created something good here, as the band on the whole have written, recorded and performed a brilliant song, as it has so many good elements to it. XIX Reality Check is a track that has a Thrash Metal vibe to it, especially on the guitars and drums, the vocals are really good on this. XIX Mantra Of Sulphur is a good one minute track that leads into the last track of the album. XXI Wandering Through Cerebral Paths is a really good song, as it also has some cool elements to the track.

Overall, I liked the album created by Agony Face. If you are into the Death Metal genre or wanting to listen to something new or heavier, I recommend that you go and check Agony Face out on their Facebook page.

I would give Agony Face and their CXVI Evolving Discharges album a 4.5 out of 5 as they impressed me enough to wanting to hear more from them.