When I got the Individualist EP from Adder’s Fork through, and put it on I was thinking, What is this? As I listen closely to it, I immediately thought, OK this is Metal, with Goth overtones to it, and I like it. Now when I did a little bit of research on Adder’s Fork, and when I found out that the band is a Post Punk band, and I thought, This could mean that they have some punk elements, or have Goth elements or both. the reason why I say this, is when Punk was on the decline back in the very late seventies, early eighties, there was a good few Punk bands, at the time decided to switch from Punk to Goth, the most famous band that did the switch was The Damned, as they were credited with the first band to release the first Punk single in the UK back in 1976, with the song New Rose. 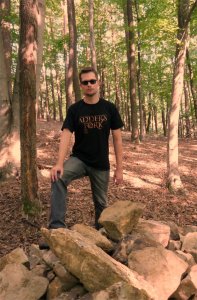 With the Individualist EP playing in the background, for me to get an initial impression of what the band is going for, and from that initial run through, I thought, OK, this Adder’s Fork has something here. As I listened to the EP for a second time, to get a more in-depth understanding of where the EP is coming from. The songs that I have found that I liked or I have found interesting are: Moonshift, The Individualist, Witchgrove Mountain, We Stare Into The Fading Sun and A Wall Behind the Curtain.

Moonshift is a good little intro, that is a good introduction to the EP. Now with The Individualist song, this reminds me of the early period of Goth Rock of the early eighties, but it has a modern vibe to it, the song has some cool riffs, the vocals are on point, and the rhythm section of the drums and bass are brilliant, as they help drive the song along. Witchgrove Mountain follows on from The Individualist, the vocals on this track has some growls, sort of, but they work really well with the music of the song. We Stare Into The Fading Sun has a slightly different vibe to the rest of the EP, especially on the guitars, as the are slightly faster in the timing, and there are some cool riffs and are more heavy throughout the track. I like A Wall Behind the Curtain, as it is a lot more heavier than the rest of the EP, in parts of the song, it has a more Metal vibe, in places it reminds me of some Thrash, but it has a Goth overtone to the overall sound off the track.

Well, what can I say, The Individualist EP is really, really good, it has everything on it, from soaring guitars, thunderous drums, brilliant bass lines, and on point vocals. Now if you are into either the Post Punk, Goth, Metal or Rock genres, or wanting to listen to something new, then I highly recommend that you go and check Adder’s Fork out on their Facebook page.

I would give Adder’s Fork and their The Individualist EP a 4.5 out of 5 for a brilliant EP.