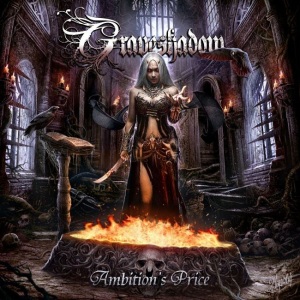 When I came across Graveshadow, a few months back, I was wondering what these guys sounded like, so when I got the Ambition’s Price album sent to me, I was OK, so what do they sound like? When I put the album on, briefly,so I could get a general idea of what the band sounded like. From what I heard on that initial listen, I thought they were pretty good. Fast forward to now, when I revisited the album, my initial thoughts back the still held up, I still think they are pretty good.

So, I as listened to the album in a more in depth way, to get a better understanding of what the band is going for, the first three songs are really good, and each song is making me a more of a fan of these guys. As the album went on, I was becoming more and more impressed with it. The songs that I have found that liked or I have found interesting are: Doorway To Heaven, Widow Of The Raven, Ambition’s Price, Hero Of Time, Gates, The Unspoken, Return To Me, Slave, Liberator, Warchief and Eden Ablaze. 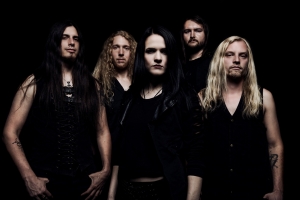 With Doorway To Heaven as the opening song off the album, this was one of the tracks that got me interested and like the band, the vocals on this, is brilliant, as there is both clean and growl, I also like the guitars on this, as there is some cool little riffs. Widow Of the Shadow is one of those tracks that has soaring vibe, especially with the Symphonic elements to the song, also the vocals and guitars on this are really good, as they work well with the Symphonic elements. Ambition’s Price is more of a melodic song, as the clean vocals are more slower, the growl vocals are a good counter point to the clean, also the guitars are good as well, as there is some cool riffs throughout the song.

The vocals on Hero Of Time, start straight off the blocks and are really good, now with this song, it reminds me a touch of After Forever, Nightwish and Within Temptation, in a way in the vocals and on the guitars. With Gates, at first I wasn’t to sure about it, as it – to me anyway – is a ballad, but after a couple more listens to it, I started to like it, especially the clean vocals. On The Unspoken, I like the Symphonic and the Metal combination, and the guitars are perfect. At the beginning of Slave, the intro reminded me of several Marillion tracks, and I thought the song was 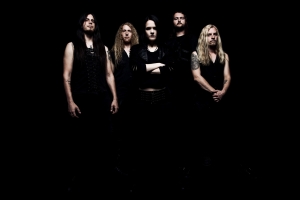 going to have that Prog Rock vibe to it, but it went straight into the full on Symphonic Metal mode. On the Liberator, I totally loved the guitars on this song from start to finish, as they started off fast and furious, and kept the intensity throughout, it could be said for the vocals as well, as they follow the guitars, and the drumming pretty intense as well and they do help to drive the song along, and I also like the organ on this track, as it is really touch. Warchief is one of those tracks that is one of my favourites off the album, as it is an upbeat songs, I could get people up and in the pit, moshing away, this has gone onto my personal playlist. With Eden Ablaze, it might start off with a piano and has a slow intro, but it builds up with some amazing guitars, drums and vocals.

Well, what can say, Graveshadow is one hell of a band, the way that they have combined the the Metal and Symphonic is really good, they have crafted a well written album in the form of Ambition’s Price. If you are into the Goth, Doom, Symphonic Thrash Metal genres, or just looking for a new band to check out, I would highly recommend that you go and check Graveshadow out on their Facebook page.