When I first came across Evilon, it was a few months ago, and I have listened to some of the Leviathan album in that time, plus I have played one or two tracks of the album on my radio show Project Metal Across The Pond, which is on the Digital Revolution Radio. When I have sat down and listened to the album properly, and my initial thoughts were, OK, this is pretty good.

As I listened to the Leviathan album more closely, for the second time, the songs that I found that I liked or I have found interesting are: Eye Of The Storm, In the Shadow Of My Grief, Leviathan, Serpent Eye, Souldrainer, Sound Of The Tombs, The King Of A Thousand Suns, The Sacred, Welcome Home and When The Leaves Are Falling.

Eye Of The Storm is a good song that opens up for the album, as it has that energy that hooks and makes you listen to the rest of the album. In The Shadow Of My Grief, now on this song I can hear the Death Metal sound on the guitars and drums, which is good and what makes it better is the vocals that accompanies the music. Leviathan is a more Melodic than the previous songs which is pretty cool, the whole sound of this t 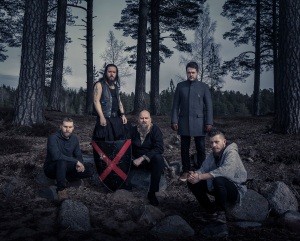 rack that the band is going for really good and I like it. Serpent Eye is one of those tracks that can get you up and into the mosh pit and it has that type of energy to it. Souldrainer is like Serpent Eye, as it has that energy and power. Sound Of The Tombs is a brilliant track, as it has some cool guitars on it from start to finish, also the drums are on point, and this has gone onto my personal playlist.

The King Of A Thousand Suns is another track that has that Melodic Folk vibe especially on the vocals and guitars, and I also like the transitions between the acoustic elements and the Metal elements. The Sacred has a cool intro

with the electric and acoustic guitars, and when the main song kicks in I was thinking, OH, this good, and I liked both clean and growl vocals on the song as they compliment each other. Welcome Home, I like this as it blends the Folk and Metal elements really well. it also has some really nice riffs throughout the song.

Overall I really liked the Leviathan album by Evilon, as they blend the Folk and Metal genres really well. If you are into the Death Metal and Melodic Folk genres or you are looking for a new band that you want to get into, the Evilon is the band you for, so I would recommend that you go and check out Evilon on their Facebook page.

I would give Evilon and their album Leviathan a very solid 4.5 out of 5 for creating a good album that blends two different genres brilliantly.