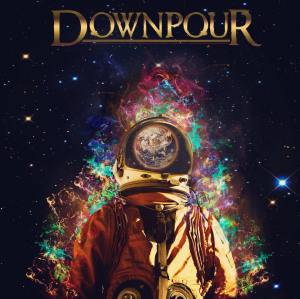 Over the last few years, infact over the last forty years, I have listen to a lot of Rock and Metal, ranging from Rock n Roll to the Extreme Metal such as Black and Death Metal. As I put on Downpour’s self titled album and done some research on the band, and when I found that they are a Brutal Groove band, I was OK, I am liking what I hearing, and I am liking the genre that they are in.

Like I said my initial thoughts of the album was good, when I started to listen to the album for the first time. After I have listened to the album a few more times, the songs that I have found that I liked or I have found interesting are: The Serpents Tongue, Truth in Suffering, Astral Projection, Still Waiting, Beautiful Nothing, Without the Fear and Mountain.

Truth in Suffering is a good song, as it has that brutality with in the guitars, drums and vocals. Astral Projection, I like this song for the drumming on the song, I also like the vocals as well, because they fit well with the song, also there is some cool riffs from the guitars. Still Waiting, is a slower song and I like it because of how its arranged and also how they have incorporated the acoustic guitar, how the drums are played and the vocals are on point on this song. Beautiful Nothing loving the guitars and drums on this track as they work really good together on the song and the vocals are more dirty on this song and top a good song of. On Without the Fear, I liked vocals, as they go from Clean to dirty at a drop of a hat, the drums are brilliant and the guitars are superb.

Well, overall, the self titled album from Downpour is really good and I enjoyed the album from start to finish. So, so if you are a fan of the Brutal Groove genre then Downpour is the band for you, or if you want to check out a new band, then I would recommend that you go and check Downpour out on their Facebook page.

I would give Downpour and their self titled album a 4.5 out of 5 for a really good album