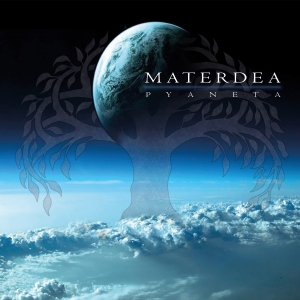 When I did a little bit of research on MaterDea, I found out that they are from Italy, and I was thinking OK, here is another band from Italy, lets see what they have in store for me. So when I put the Pyaneta on, I was OK, my initial thoughts are that the band are pretty good, and Italy has produced another decent band.

After I have listened to the Pyaneta a good few times, I have come to the conclusion that MaterDea are a really good band, as they blend the male and female vocals well, also they have that Symphonic Rock element to their overall sound.

The songs that I found that I liked or I have found interesting are: Back To Earth, The Return Of The King, One Thousand and One Nights, Pyaneta, Neverland, S’Accabadora, The Legend of the Pale Mountains, Legacy of the Woods, Coven of Balzaares, Metamorphosis, Bourrè del Diavolo.

Back To Earth is the track that got my interest peaked, as this track has got the male and female vocals blending really well, plus, it also has the Rock and orchestral mix just right. The Return Of The King, has some really cool string

accompaniment in the way of violins etc, which gives the song that something more, and the female vocals are on point on this track. One Thousand and One Nights has an Arabic vibe to the song, as the song title suggests that the story of One Thousand and One Nights is an Arabic tale. At first I was too sure about the start of Pyaneta, but after the third listen to the song, I started to like it, as it has that combination of good vocals, orchestral arrangement and a good sound from MaterDea. The Legend of the Pale Mountains, has a French vibe going on especially at the beginning of the song and it carries on somewhat throughout the track, in a way its a good shift away fro the other tracks that has come before, but it has really good Rock melodies and some cool little guitar riffs. Legacy of the Woods, I like this track as it has a really good blend of the orchestral, the band and vocals. Bourrè del Diavolo, I like this track as its a bit more heavier than the other tracks and has some traditional instruments on the song, and the vocals are on point and fit well with the music that the band has gone for.

Overall, I really like this album by MaterDea, as it has a brilliant flow to it, especially with the orchestral accompaniment throughout the album. As I was listening to the album, the album has a Nightwish vibe to it, mainly the Annette Olsson era of Nightwish, with some Tarja era thrown in as well. I would highly recommend that you go and check out MaterDea on their Facebook page, as these guys are really good.

I would give MaterDea and their allbum Pyaneta a solid 4.5 out of 5 for a really enjoyable album