Recently I came across Paganland and done a review for their Gods Of Golden Circles demo, and I found that, with that demo I came it like to what I heard. Now, Pagaland sent me two files containing music, the first was the demo, the second is From Carpathian Forest. As I put the album on to listen to it, I Was like OK, this band has definitely improved on many levels, since they done the Gods Of Golden Circles Demo.

As I listened to the From Carpathian Forest album, I am becoming even more of a fan of Paganland. The songs off this album that I have found that I like or found interesting are: Stozhary, At The Heart Of Carpathians, Black Mountain, Belted By Spirit, The Gloom, From Carpathian Land, Chuhayster. 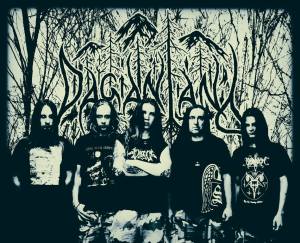 Stozhary is a brilliant intro for the album, as it uses orchestral parts throughout with some really good guitar work. At The Heart Of Carpathians. is a really good track, as it has everything that you want on a Black Metal track, it has got good drumming, brilliant guitar work, and the vocals are awesome. On Belted By Spirit, I was totally rocking out the track , it was due to the amazing guitar work, plus with the symphonic elements to the track, this on of my favourites off the album and is on my personal playlist. From Carpathian Land is the title track of the album, and when I first heard this track on the first listen of the album, I was loving it as it has everything you want, it has soaring guitars, brilliant drumming, and lots of symphonic brilliance laced throughout this eight and half minute track. Chuhaster is a really good outro for the album, like Stozhary, it has orchestral parts using traditional instruments.

This album that Paganland have created is fa-nominal, the band might be called Pagan Black Metal, but they have taken elements from Symphonic and Melodic and created something spectacular. If you are into the Black Metal genre or looking for a new band, then I would highly recommend that you go and check this band out on their Facebook page, you will not be disappointed.

I would give Paganland and their album From Carpathian Land a 5 out of 5 for a sublime album.