Over the years, I have come across a lot of band that have come out of the Yorkshire region of the UK. Some have not been good and some have been brilliant. Monolith Cult is in the latter group of bands. As I have listened to Monolith Cult’s album a good times over the last few weeks and my initial thought of the band were good and also they caught my interest from the very start of the first song off the album.

Now I have listen to the Gospel Of Despair album – like I said – a good few times now, and from my initial thoughts when I first put the album, to now is, I thought they were good, but now I am a fan of these guys, as they have created a brilliant album within the Doom Metal genre.

Disconnection Syndrome is one of those track that within the for fifteen seconds – for me anyway – had hooked me into liking the band straight away, it has a brilliant opening with the drums and guitars. The Gospel Of Despair reminds me a little of Sabbath in some parts of the song with the guitars. With Complicit In Your Own Abuse, the guitars on this song are really good and heavy as you might expect from the Doom Metal genre. Death Means Nothing is another song that has some brutal guitars, which will appeal to a lot of people. 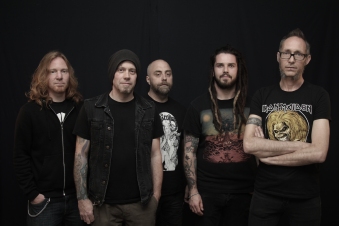 Now, I know that some of the material that the band is singing about, can be very dark, to some people, that is what draws them to the Doom Metal genre, this is what partially draws me to the genre, that and the heaviness of the music and the stories that the band comes up with. I really liked Monolith Cult, because of what they have created here with Gospel Of Despair, for the reasons I said above. So if you are into the Doom Metal genre and/or wanting to get into a new band then I would highly recommend that you go and check Monolith Cult out on their Facebook page.

I would give Monolith Cult and their album Gospel of Despair a 4.5 out of 5 for a superbly dark album