When I came across Dying Awkward Angel a few months back, the Absence Of Light album was sent to me through via email by Rockshot Records. As I put the album, I was immediately struck at what genre the band were, now, I am a huge fan of Death Metal, but a fan nonetheless, but over the last 25 plus years, I have been on the fringes of the genre, and there are some Death Metal bands that I am a fan of and some that I am not a fan of. As I try to explain to people I do try to give all bands etc a chance to impress me or at least get my interest in whatever offering they send me, and Dying Awkward Angel have caught my interest.

Now, as I listened to the album, the band have created something interesting to the point, where, I would it is good, as I am enjoying what the band have done on this album, as it is not what I expected from a Death Metal band. Yes, there is a some extreme fast paced Metal on album, but overall, the album is not in your face with the growls, dirty vocals, or over the top screaming guitars etc, they – to me anyway – got it just right. 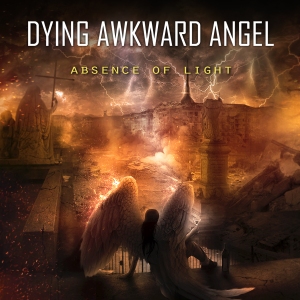 The songs that I found that I liked or I have found at least interest are: Blood Of Your Blood, Death Coach, Isaiah 53 7, Shade, Dolls, Sancta Sanctorum, Absence Of Light, Maldita Seas, The Dust Devil, Tusk and Killing Floor.

On Isaiah 53 7, this song caught my attention, as the guitars are good and heavy and work really well together. Shade is another song that every instrument works well, it is also – to me anyway – a bit more aggressive. Now with Sancta Sanctorum is a bit melodic, which to me I like, as it shows to me that the band can do more than just pure Death Metal. Absence Of Light is a song that starts off slow and is an instrumental and is a brilliant chilled little filler for the album. Maldita Seas and The Dust Devil are similar in their intensity with some sweet brutal guitars and drums and the vocals are on point. Killing Floor is a really good closing track, as it has the intensity and power, also the band work extremely well on this song, and the female vocals were spot on. Overall, the guitars and drumming are brilliant and the vocals were good.

I would give Dying Awkward Angel and their album Absence Of Light a 4.5 out 5