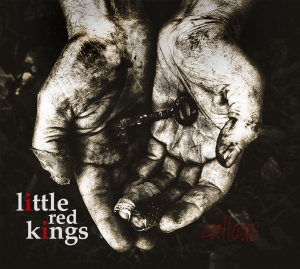 Over the last three years or so, ever since I started Project Metal Music, there are a lot of bands that have sent me their music, and the vast majority of that material has grabbed my attention, whether it their sound or subject matter that they have written about, and Little Red Kings is one of those bands that have grabbed my interest.

When I first heard of Little Red Kings was a few week backs, when someone invited me to like their Facebook page. When their manager sent me their Callous through at the beginning of the week, I put the album on and I was instantly interested in what they sounded like and to the point where I decided to make them the featured artist as The Double Shot Of The Week on the Project Metal Across The Pond radio show.

Now, when I was putting the radio show together on the Tuesday, I listened to the Callous album, to find which two songs I was going to use for the Double Shot Of The Week on the September 13th 2018 show. I chose Said To Me and Blacken, as I found that these two tracks interesting.

Over the course of the album, the songs that either I found that I found I liked or I found interesting are: Said To Me, Josephine, Blacken, No Friend Of Mine, Chaperone, Meth Mouth Blues, Prize Of A Life, A Lovers Tragedy, Rigor And Roll, Long Live The Quiet Man, Patience (Losing Sleep), Propaganda Lie, Till And Toil and Fetch Me Water.

Josephine has a really cool Blues Rock vibe to the song which I like. Blacken is a song that really interests me, as it has some cool guitars and drums on this and the vocals are on point. Meth Mouth Blues is an interesting track, I like it because of the style, it reminds me of Eric Clapton and Dire Straits in a way. Rigor and Roll is one of those songs that I found interesting, as I liked the guitars and vocals on this song, as they are a brilliant blend between the two. Long Live The Quiet Man is brilliant, as this is a more of – in my mind – a Blues Rock track, I loved the vocals on this track as it really sets the tone of the song. On Patience (Losing Sleep), the guitars are so good, and it is the same with the drums, as these compliment each other to the point that they drive the song along. With Propaganda Lie, the start of and throughout the song reminds me – to a point – of early AC/DC with some of the guitar work, and overall I really like this solid song from Little Red Kings. Till And Toil has a brilliant guitar opener as it is dirty and heavy, and it continues throughout the song with some quiet parts with the song, and this song reminds me a little of Led Zeppelin.

Overall, the Callous album is a really good and I highly recommend that you go and check these guys on their Facebook page as these guys are well checking out.

I would give Little Red Kings and their Callous album a 4.5 out of 5 for a damn good album. Project Metal Music