When Satanic sent me their Architecture Of Chaos album through, I a few questions,  and one of those questions was Where are they from? When I did a bit research on the band, I found out that they were from, they are from Colombia. I know that Colombia loves their Rock and Metal, but I only know of one maybe two bands from there. 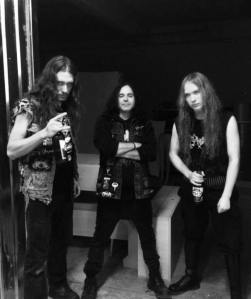 When I listened to the album for the second time, and delved into the songs a little bit more, this was the time when the band started to grow on me, as they had written and performed the songs brilliantly. The songs that took my interest are: Mephistophelian, World Of Chaos, Processing The Undead, Architecture Of Apocalypse, Armageddon, Systematic Fear, Biotech Warfare and Tchernobyl 86. The only downside on this album, is that on some of the songs is, the drums were a bit too much, but overall the album was really good. On Processing The Undead has a brilliant bass intro and really good guitar riffs throughout the song.

If you like the Black and Thrash Metal genre combination, or looking for something different, you’ll going to like Satanic. I would recommend that you go and check out Satanic on their Facebook page.

I would give Satanic and their album Architecture Of Chaos a 4 out of 5, a solid album overall