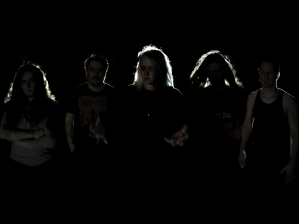 Over the 40 years or so, I have heard of a lot of different genres of metal, ranging from Folk to Pagan to Black and Death metal. Now over the last decade or so I have come across Groove Metal, and at first I wasn’t particularly struck by it, but in that time I have come to be somewhat of a fan of it. When Casket Robbery sent me The Ascension EP, I was OK, what you got? And when I put it on, and did a bit of research on the band, I noticed that they were a Brutal Groove Metal band, and I was like, Well, this is new to me, and I like it. This was after the first listen to this three track EP.

The three tracks are Pockets Lined with Flowers, The Ascension and Lilith. The first track Pockets Lined With Flowers, reminded me a little of Rob Zombie, especially at the beginning. This song I really like as it has some amazing drumming on it, and Megan’s vocals is on point on this track.

The Ascension is up next, now, over the last twenty years I have listened to a lot of female fronted rock and metal bands, some of them have been somewhat bad, but majority have been absolutely brilliant and Casket Robbery is definitely in the latter, The Ascension is a perfect song for Megan, as it showcases her vocals brilliantly, that and the band behind her are superb.

The last track off the EP is Lilith, this song is another great offering from the band, and in some way this reminds me of Arch Enemy with its song construction and Megan’s vocals, and this song is brilliant, with its riffs and shredding.

I have listened to The Ascension a good few times and I found that I am a fan of Casket Robbery and the genre Brutal Groove Metal. I would highly recommend that you go and check out Casket Robbery on their Facebook and Bandcamp and Twitter pages.

I would give Casket Robbery an The Ascension a 4.5 out of 5, to me this is another amazing band that is fronted by a very talented woman.