When I do a review of an album or EP, I put whatever I am reviewing on, I tend to listen to it in the background to get the general idea of what I listening to, whilst doing some research on the band, but when I put on Amoretum Vol. 1 on, I was OK, what’s this? Now, when I initially put this on, I thought that they were a Goth, Cyber Goth band, but when I went onto their Facebook page, they are actually a New Wave of Heavy Psychedelic Spacerock. But I can here some Goth and Cyber Goth elements to one or two of the tracks.

Well, after a few more listens to the album, I must say that these guys do this New Wave of Heavy Psychedelic Spacerock genre justice. the tracks that have made an impression on are Fire! Fire! (Death of a Giant) as this has some fine guitar work, and I do like the vocals on it as well. Lovely Lovelie, I this track because of the vocals, as they have that raspy growl and coupled that with some riffing on the guitars, it makes the song good and heavy. 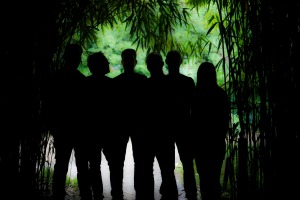 Another Sort of Homecoming, this has that goth vibe to it, especially on the vocals, and on parts of the guitars. When I heard the track Soul Shelter (Inside of Me), this definitely had an old school goth vibe to it, and I was racking my brain where I have heard this style before, then it came to me Bauhaus, and when I looked at the bands profile on Facebook, one of their influences is Bauhaus.

Movements is another track that has intrigued me, OK it may start off slow, but about half way through it picks up in a dramatic way and rocks out in a big way and then slows down somewhat. Come and Fellow did interest me as this track had some punk elements to it and is a really fine track.

Friends Are Falling, is good and heavy in the guitar, with some nice distortion on them. Fellow Peacemakers has some amazing drums and guitars on this, there is a piano overlaid on this which makes it more richer in the overall sound of the track.

Well, what can I say about Black Space Riders, and the Amoretum Vol. 1 album, apart this is absolutely brilliant. This album is well structured, written and put together. If you like the Psychedelic or Psychedelic Spacerock genres you are going to love this band, I know I do, I would recommend you go and check out Black Space Riders on their Facebook page.

I would give this album a 5 out of 5 as this album took me on a journey through time and space, awesome album.