On Tuesday (Nov 14th), when I found out that Dakesis is on tour again and they were playing Trillians in Newcastle Upon Tyne, on November 15th, I had to go and see them, as they were playing with Fury (a band that I haven’t seen before) and Sin Theta.

Now I have seen Dakesis and Sin Theta before, seen them live in April of this year (click here to see review) and back then I was very impressed by them to the point that I wanted to see them again.

As I got to Trillians early ish I managed to see Fury and Sin Theta soundchecks and from what I saw of it, I was somewhat impressed by what I heard, and was looking forward their full sets to see what Fury were like and to see if Sin Theta have improved from the last time I saw them.

With Sin Theta up first. 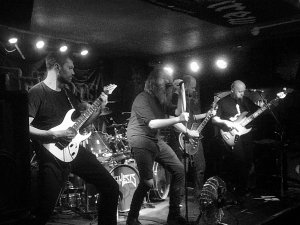 When they finished their soundcheck they pretty much went straight into their set. As they started their set proper, I was thinking OK, have you improved? As they dove into the first few songs, I was like OK, you have improved, I like it.

In between songs the lead singer was interacting with the crowd, and the crowd was responding and it was good to see. At one point, the singer said Has

anyone here heard of and

like Metallica? Yes? Well we are playing a Megadeth song Black Friday. As they went into it, they did a pretty good job of it. 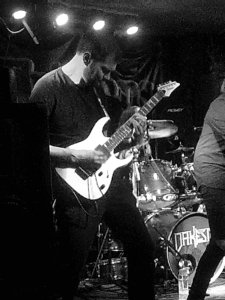 As their set wore on, they were getting better and better, and I could definitely see that they actually improved. the whole band was enjoying themselves on the stage. When they had finished the crowd cheered and give them a round of applause.

Well, this is a band that I wanted to see, as I haven’t seen or heard of them before, so I was curious to see what they were like. When I came into Trillians they were up on stage, doing their soundcheck and that’s when I noticed the bassist, I thought, hang on I know her, I have seen her before. It took me a few minutes to realize that she is the bassist for Triaxis.

When they cam back on stage to do their set. OK, I have heard you doing your soundcheck and you have got my attention. As they started, I thought that these guys were pretty good.

Over the set, there was a load of riffing and shredding, as they have a similar style to Iron Maiden and such other bands. Now, in the middle of the set the singer was doing power stances, moving his hands to make the point of lyrics that he was singing, at the time, I was like, do you 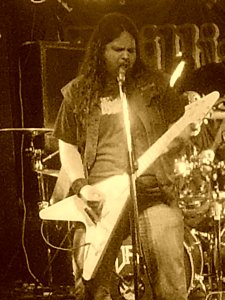 really need to do that, but when I came to think of it, that is part of the show and who he is. After a time he grew on me I started to enjoy what he was doing.

Now, when the singer announced that the usual guitarist couldn’t a four date stretch of the tour they got in a replacement, and they guitarist didn’t have any rehearsal time, but he was shredding away and riffing out, and I was thinking Damn, dude, you are good. The drummer was proper awesome, but there was a time where he stood up and Dabbed, yes DABBED!!, and I was like No, you are an amazing drummer and you don’t need to do that to get noticed. 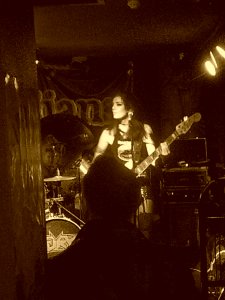 Over the time of the set they impressed me so much that I want to see them again when they come up to the North East of England again.

Their last song that they did was a metal version of What Shall We Do With A Drunken Sailor. This was the song that got me liking Fury, as this was done for a laugh. You had to be there to see this song performed, it was brilliant.

Dakesis was up next. Ever since I came across them back in 2016, I really liked their album A New Dawn and when they announced that they were touring in 2017, I had to go and see them, I saw them play Trillians back in April when they toured with Triaxis. When I first heard them

on their Album A New Dawn they were really good, but when I saw them live for the first time I was thinking that, These are actually better live. So when I found out on Tuesday that they were playing Trillians again I had to go see them again.

It was time for them to come on stage to do their set, they started off with a couple songs on of which is Liar, then they did The Great Insurrection off the A New Dawn album, which is an awesome song to hear live, as its a different experience hearing it live than it is on the album, as you can see the emotion and the passion of the band.

As the band went on, they did an old song called Wings Of Steel, as it is the singer’s favourite song from their back catalogue. The band enjoyed playing it as much as the singer did, as the band had smiles on their faces when they started playing it.

To Conquer Or Die was up next, this song has to be one of my favourite tracks by Dakesis, and I’ll be playing it on my radio show Project Metal Across The Pond on Digital Revolution Radio. This song totally rocks.

Over the course of the tour, they have been getting the Merch girl up on stage to do a song, and as the singer said when the merch girl got up on stage that she is a good singer, and she was. They did the song Called To Freedom as it is the merch girl’s favourite track.

As they finished the song Call To Freedom, they got the singer from Fury up on stage to do a duet, and I was wondering what they were going to do, and when they announced that they were going to do Phantom Of The Opera (Andrew Loyd Webber), I was like OK, lets hear it. When they went through it, they were really good and they were acting out some of the scenes from the musical.

As they came to an end of their set they did By The Fading Light. This track is a ten minute Prog adventure and it was brilliant to see performed.

After that song came to a close the crowd wanted an encore, so they did a song by Bonnie Tyler, and if you were around in the 80’s this song was all over the place, as it was one of Bonnie Tyler’s biggest hit of the 80’s, the song was Holding Out For A Hero. When they played it I was trying to watch all of the band, as I know the song pretty well and it is hard to play especially in parts with the drumming.

From start to finish, I thought that the guitarist’s fingers were going to burst into flames as his fingers were moving so fast on his guitar that I that he was going to like I said burst into flames, the drummer was like an octopus his arms and legs were just a blur, this cover version was brilliant to see, If you get a chance to see this version of the song done by Dakesis you’ll gonna love it.

I would highly recommend that you go and check out any of these bands on their Facebook pages, you will not be disappointed.

Fury is a 4.5 out of 5 for being really good entertainers

Dakesis they get a 5 out of 5 they were awesome especially when they did the Phantom of the Opera with the singer from Fury, Holding Out For A Hero and getting the Merch Girl up on stage to do a song.