Ever since I first saw Hivemind in June of 2016 (back then they were called Masamune) when they supported Lava Frog at the O2 Academy in Newcastle for there E.P. launch, I decided then I had to follow them as they impressed me so much. When I heard that they were going to do a gig at the Independent in Sunderland a few weeks ago, I had to go and see them. When I saw the line up for the gig I was like OK, Hivemind are headlining the gig, Absorb Live and La Familia I haven’t seen before, and when I saw Rob Liam Lowery (guitarist for PussyWillowFurryVenus) was the opening act I was like, Brilliant, he’s one hell of a guitarist and singer.

Last night, when it was time set off to the venue, I got there early (like I normally do), I was waiting out side for the doors to open, I saw some familiar faces and started talking to them until we went in.

Now I have seen Rob doing an acoustic set once before and he was brilliant, and I have seen him as the guitarist for PussyWillowFurryVenus twelve times. I was really looking forward to seeing him perform his solo set. As he came on stage, there was a fair amount of people there to see him. As he started, the crowd and myself included were rocking out to him.

He was doing the majority of the set with original material, prior to the gig I did read that he might have done some Placebo, but he decided he wasn’t going to do them on the night, but he did do Brittany Spears’ Baby Hit Me One More Time, as I was watching him perform it, I could tell that he was having a bit of fun with the song. I have to say that this was one hell of a set by Rob.

Now I haven’t seen La Familia before, and I didn’t know what expect from them. When they were announced as a Hip Hop trio, I was like Oh gods, but gave them a chance. Now I can listen to a lot of genres of music, other than Rock and Metal. I don’t mind Hip Hop if it is done properly. La Familia are good Hip Hop artists, but after two or three songs I had to come out of the venue, as they weren’t my preferred taste of music.

Absorb Live are a Grime/Dubstep artists, like I said before I can listen to a lot of genres of music, but Rock and Metal is my preferred genres. Now I did find Absorb Live pretty decent act, as they were entertaining and interacted with the crowd, but like La Familia I had to come out as they weren’t my preferred style in music.

Hivemind was the band I wanted to see (them and Rob Liam Lowery). Prior to their set starting Lauren (the singer) came up to me and said that they were doing three new songs in their set. When they were introduced, I looked around and there was quite a few people there to see them, and the crowd were cheering and clapping for them. As they started their set, they started with Gods and Guns which is one of my favourite songs by them. Sweet 16 (new song and next single) which is good, as it is about being in school and being bullied by people who are not very nice.

Velvet Thunder was up next and this is also one of my favourite tracks by Hivemind. this track absolutely brilliant, the way that the band play on this song is mind blowing.

Right From Wrong (new song), now this song was very emotional for Lauren, as this song was written by her after one of her friends that committed suicide, It was really heart wrenching to see Lauren being so open about what happened, the song was beautiful to listen to.

Bad Disease (new song) is a song that was really good. House Of Mirrors was up next this is about manipulative people that surround you, the guitarist Steve played some amazing riffs on this song, and Lauren’s vocals were brilliant. At this point of their set people were actually dancing to them, which gave the band the energy to give even a better performance.

Wicked Games, everytime I hear this song performed live, I’m like nodding my head and really enjoying the song. 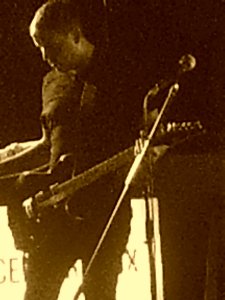 Riot Envy was up next and was the last song of the set, and this was one hell of a song, as they played with such passion and energy, that the crowd were starting a mosh pit (in a way), as I was standing to one side of the venue and I was split watching the band and the crowd and I was Yeah, now this is gig, when the crowd starts a mosh pit, OK, granted it might have been 5 or 6 people, but it was a mosh pit.

When the set was over, people were shouting more, more. So this was a first for Hivemind, as that they got to do an encore, and the song that they did was Judge, Jury and Executioner and this by the gods did this song get the crowd going, as there were even people dancing. Everyone, when the band finished were cheering as they thoroughly enjoyed themselves.

James the bassist was doing backing vocals on Sweet 16 and Riot Envy, plus throughout their set, there were some ad libs from James on some songs which were pretty cool.