For over a year, I have been following Dean James and The Blacks Dogs, and in that time, I have seen them on several occasions, I must say that each time I have seen they have improved, last night was no exception. 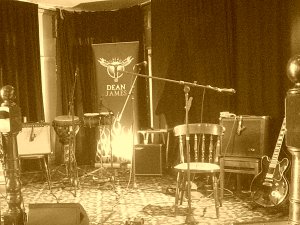 The venue that the gig was held at was The County in South Shields, in the North East England, it was a pretty good place as the staff were friendly and the drinks were reasonable.

There was going to be 4 bands playing, but 2 had to pull out at the last minute due to ill health, which was unfortunate, as i was looking forward to seeing them.

This 4 piece blues band were really good, they played some cover songs and did some original material. 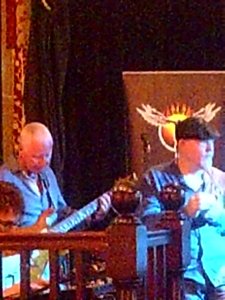 As they went through there set, I was like, Yeah these guys are really good. After listening to and reviewing Black and Death Metal bands for 3 days straight, Blue Bayou were a welcomed relief.

There was a good few songs that stood out for me, they were Folsom Prison Blues, Band Of Hope and a slowed down version of the Blues Brothers song Sweet Home Chicago. When they did Folsom Prison Blues, I was in heaven as this is one of my favourite songs by Johnny Cash. About half way through their set people started to get up and dance, which is always good to see. 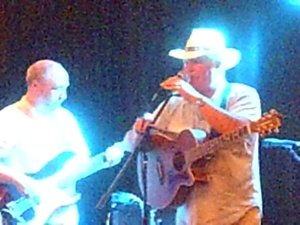 Well these guys have impressed me enough to want to see them again, and to hear if they have come up with more original material.

Dean James and The Black Dogs

When Dean James announced that he and The Black Dogs were doing this show a few months back, I was so hyped for it, I couldn’t wait for it, It was last October when I saw them play live at the The Charles Young Centre in South Shields.

Dean himself usually plays an acoustic guitar, but last night he was playing a sweet electric guitar and the songs that he played last was much richer for it.

Last night he played some old and some new material, the old songs he played is off the Pure album that he released last year, they are Cole Bad Day and Move On. The new stuff was Hate Me, Hollywood Sleazy which is about a local band Velvoir who are absolutely brilliant as i have seen them live twice, and The Truth.

They done couple of Nirvana and Bob Marley covers, which went down pretty with the crowd and me.

When they played Hollywood everyone was going mental for it, and by the looks of it, it will be turning into anthem for people. When Dean and The Dogs were finished their set, people were screaming for an encore and shouting for Hollywood to be played again, but sadly to no avail they played a Bob Marley song.

I would give Blue Bayou a 4 out of 5, I would give more but I want to see them live again, to see if they come up with more new material.

I would give Dean and The Black Dogs a 5 out of 5 for putting on an awesome show.