Well what can I say, when PussyWillowFurryVenus announced that they were playing the Legacy Rock Bar on St George’s Day (23rd April), I wanted to go as the two bands that were supporting I hadn’t seen before so went. The bands that were playing with them was The Likkor Men and Mausoleums.

When I am going to a gig, I do tend to get there on time when the doors open, but this gig, the doors opened at 12:30pm and that was a little too early for me, but the bands didn’t start until 3pm, so I thought might as well get there between 2pm – 2:30pm, as I had other commitments to sort out.

As I got there the Mausoleums were setting up and sorting out a video feed to go onto the over head projector. Now the Mausoleums are a electronica, old school goth, dark wave, aggro tech duo, and if you like those genres of music you will love the Mausoleums.

As they went through their set I was transported back to the late 70’s and early 80’s when the goth was coming to the fore as a new genre of music, and I found myself nodding and tapping my foot with the music.

When a band that I haven’t seen before does that, that’s when I know that they are good. As they got near the end of the set they announced that there will be a single coming out on the 12 of May, so I thought OK I’ll keep an eye out for it, as they played it in their set.

As Mausoleums finished and came off stage, The Likkor Men started to set up for their set, as they were doing a quick soundcheck these guys are ear shatteringly loud. when they did the soundcheck they went outside for a smoke and after five minutes they went back in to start the set. 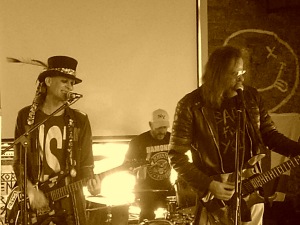 Now as they started The Likkor Men I was trying to workout what genre they were and it wasn’t up until the second song that I realized that they were a sleazy dirty rock. The guitarist/singer was producing some awesome guitar work as he was making his guitar scream. The drummer was intense when he had some some solos, the bassist was totally on point, and the other guitarist was brilliant.

As they went through the set they were interacting with the crowd and the crowd was loving it as they were laughing and joking about. As they were finishing up, I came to the conclusion that I need to see The Likkor Men again as they were damn good.

Well, this band has intrigued and fascinated me  since I came across them back in January of last year when I was on ReverbNation looking at bands, and when PWFV came up that they were playing Fitzgerald’s in Sunderland in February of last year I had to see what they like, I went and I like them there and then and followed them ever since, and I try to get to as many of their local gigs possible.

As I have come to expect from this band they put a lot of energy into there shows and this was no exception and from the get go they dove straight into a crowd favourite Sticky Vicky, as they went through the set, it was similar to the set they played at Pop Recs Ltd a few weeks back, but I think it had a slight song change but not sure, anyways thats by the by.

As the afternoon went into early evening the whole crowd who was there and including the support bands were rocking out to PWFV, and this energy that the crowd was giving off was feeding band and that gave their performance more substance and more gravitas.

When they did the last song of their show, the band was so hyped that the crowd was cheering and clapping for a good few minutes after they had finished the show. PWFV are one of the best bands that I have seen since I started going to gigs 25+ years ago.

I would give Mausoleums a 4 out of 5 for taking me back to the early 80’s.

I would give The Likkor Men a 4.5 out of 5 for being a good loud rock band.

I would give PWFV a 5 out of 5 for keep getting better and better each time I see them.