Ever since I first saw Hivemind back in June of this year (they were called Masamune then), when they supported Lava Frog, when Lava Frog launched their EP. Since then I have followed Hivemind, to see what they come up with.

When I found out on Thursday night that they were playing Legacy in Sunderland on the 2nd of December, I thought, Damn I am going. So this was the 3rd time that I have seen these guys, so it would cool if they improved.

Now, when I  saw that Nervana (was Nodvana) was announced that they were in support of Hivemind, they were good, when I saw them twice before, when they did a gig themselves and when they supported PussyWillowFurryVenus, so when they were playing with Hivemind I thought Yes I am definitely going to these bands. But when I got to the Legacy I could only see ‘Nod’ Davis there with his acoustic guitar, so I thought OK, this is going to be an acoustic set with just ‘Nod’. When he started his 40 minute set of Nirvana songs, this reminded me of when Nirvana did the stripped back acoustic sessions for the BBC, way back in the early 90’s.  As he was interacting with the crowd in between the songs some one throw a beer mat at him, and ‘Nod’ said, “You know what would be funny, is, if I caught that in my mouth” and then proceeded to say “Go on, do it again” and they guy did, but it fail to make it anywhere near his mouth.

As made his way though the set, he done classic Nirvana songs like Come As You Are and Rape Me. As his came to a close he ran out of material that he had prepared for and went straight into an Oasis song which was a let down for me as it sort of spoiled another wise brilliant set from Nervana.

When it was their time to their set, they got up on stage did a quick check that their equipment was in order and they started. As they went into their first song, Lauren (singer) was a little nervous, and was a little shaky, but what do you expect with a live setting. When they got to the second song, she relaxed and started to enjoy herself. As the band powered their way through the set, the crowd and myself included were really enjoying their music. 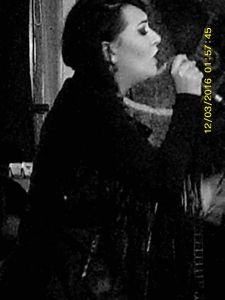 In between songs, Lauren was still a little nervous talking to the crowd, but everyone was very patient, which put her at ease, plus the rest of the band was there giving her subtle encouragement. When they started to play their penultimate song, they played their first ever single Masquerade which was a crowd pleaser and loved it. Their last song was their latest single Gods And Guns, which has been out for just over a month, and when I saw it, and I was damn  this is good but when I saw it performed live, I was like this band is good to the point that I have bought their first single Masquerade. 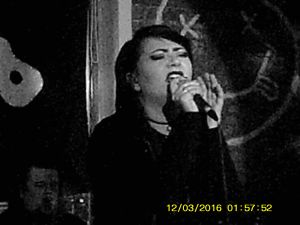 And yes, I have seen Hivemind 3 times now, and yes they HAVE improved from the first two times that I saw them.

I would give Nervana a 4.5 out of 5 for giving a brilliant performance and having a laugh.

I would give Hivemind a 5 out of 5 yes Lauren might have been a little shaky and nervous at the beginning, but the whole were brilliant.

I would definitely go see these guys again.