My name – Dima “Rotten” Danilin
Role in the band – all music & lyrics, all vocals, lead and rhythm guitars
Band page: https://www.facebook.com/socksforcocksband
Back in the 80’s when you started to listen to music, How did you get a hold of Rock and Metal in Russia then? especially when there was the Iron Curtain and the west was viewed with suspicion?
Back in the 80s all foreign heavy music was banned in Russia. Even such innocuous bands like KISS, Led Zeppelin or Scorpions. I still remember our music teacher telling the class: “Beware, children! The CIA has formed these metal bands to destroy you. Don’t let that happen!” Yeah, you wish! The “Iron Curtain penetration” started with b/w photos of metal LP covers sold under the table at schools. I looked at black ’n’ white “Killers”, “Unveiling the Wicked”, “Bark at the Moon” etc. and thought: “Man I gotta hear this, ban or no ban!” I became a fan even before I actually heard the music, haha!
How did you get it? When you did get a hold of the music, how much was it back then?

There were flea markets in major Russian cities where they illegally sold metal LP’s at a price equaling an engineer’s monthly salary! You could rent an LP without a cover for a week to dub it on tape at the exchange of your passport or a big money pawn . Totally against the law, but who gave a shit! These flea markets were periodically raided by the police with records being smashed against the ground and sellers detained. Usually you would buy metal records jointly as a team with everyone paying as much as he-she could so an LP would often end up having 3-6 owners at the same time! If you wanted to own a platter all by yourself, well… I remember working for MONTH to buy an album which cost 20 dollars!

But then again with all that bootleg tape dubbing one day it finally got so big no ban could stop it any longer. During the Perestroika the ban on rock music was lifted so at least you wouldn’t have to be afraid a cop would break your “Reign in Blood” and show you no mercy.

As you listened to the music that you managed to get, what was the stand out genre of music for you? Were you thinking “What the hell is this, I want more”

After I got converted to metal as kid I used to listen to hard ’n’ heavy stuff for maybe a year. And then, THRASH! THRASH! THRASH! Not the bay area type tho. Rabid stuff like Dark Angel, Sodom, OLD Kreator, Morbid Saint etc. I was a huge hardcore fan too. And by “hardcore” I mean “crossover”. Bands like S.O.D. were called hardcore back then, at least In Russia. We understood hardcore as “fun thrash” or “punk thrash”. I don’t think I heard the term crossover used in that specific sense until mid-90s. I got introduced to “real” hardcore in ‘89 thru a WE BITE records flexi-disc in Rock Hard Magazine featuring Emils and The Idiots from Germany, Negazione from Italy and Youth of Today. Maybe some old school readers of your zine remember that one, lol. So after that I started following proper hardcore as well. Yeah, it was like more-more-more!!! I was Insatiable. Still am. Definitely my thrash, crossover and hardcore roots shaped SOCKS FOR COCKS sound in terms of sheer speed and riffing style.

When was it that you wanted to become a musician?
I started listening to heavy music in ‘86 when I was 11 and picked up the guitar when I was 13. Actually the track “Thrashin’ Granma” that you mentioned as your favorite in your “Fast Fun Punk” review was composed in ’89! On the DAY I first learned how to play a power chord! Granted, it used to have different lyrics but riff-wise it’s 100% the same on the album as it was back then.
Who was your influence on becoming a musician?
Slayer, Rumble Militia, S.O.D. , D.R.I., Sodom, Protector, Bathory, old Suicidal Tendencies, Warfare, Violent Force, Assassin etc. etc. You see, SOCKS FOR COCKS is a relatively young band, formed only in 2013 after my 13-year sabbatical! Back in the late 80s-early 90s I used to play in a lot of thrash, death and black metal bands (all of them made a difference in the local scene too). Talk about my saytanic friend!
Over the years, you have done some collaborations with different bands. most notably and recently with Lawnmower Deth Pete, Were you surprised, when you contacted him, that he would agree to do My Saytanic Friend?
I am THE number 1 Lawnmower Deth fan in Russia! You can see me wearing a LMD t-shirt to every gig, interview or whatever and definitely on the “Fast Fun Punk” album cover. I worship all of their records. When “Billy” came out back in ‘93 I was totally floored. I’ll be damned if I understand why that album wasn’t well-received! “Billy” is the prime reason SOCKS FOR COCKS exist and had a profound influence on our sound. I guess every obscure band’s dreaming about having a “star” guest on their record. Some may want Tom Araya, James Hetfield or whatever, but I have always dreamed of having Qualcast Mutilator from Lawnmower Deth on my album! So sure when I was sending “My Saytanic Friend” to Pete I had my fingers crossed and waited for his response with bated breath. But l also had a very strong faith in the quality of the material. So when he said yes, to me it was like a quality certificate, ha-ha! Pete also made some really cool comments about the song and said his whole band loved it. What more can you ask for? It’s a very, very special feeling when fates of a fan and his favorite musician get entwined like that.
Qualcast Mutilator from Lawnmower Deth: They’re fans of the band and messaged me through Facebook to as if I’d contribute. It was that simple. I had no roll and no roll in production of the track My Saytanic Friend, he just wanted me to do some guest vocals.

On the Fast Fun Punk album there is another guest vocalist Staffi from the Rumble Militia. What got Staffi interested in doing this collaboration with you?
The song “Commercial Motherfucker” is our direct tribute to Rumble Militia and particularly to their classic album” Full of Commercial”. It was one of the very first metal/punk LP’s I bought back in the 80s and It’s been one of my all-time favorite records ever since. In the original RM track “Full of Danger” Staffi sang “they say we’re fuckin loud/no place that we can play/hey fuckin moneymaker we’ll blow you away!” So SOCKS FOR COCKS song is a total nod to that awesome track of my youth.

Would you be touring with the Fast Fun Punk album?
I have 6 kids (check SOCKS FOR COCKS old track called “I am a many children’s father”, ha-ha!). As you can imagine it’s pretty hard to tour under such circumstances.

“Here’s the deal, kids. First you sing this Lawnmower Deth tune to daddy and then you may have the cake”.
The strategy being playing on very rare, but very special occasions. But we’re actually in talks about doing a small US tour next spring! If everything works out, we’re gonna play stuff from our debut “Old Skool Rocks!” and definitely from “Fast Fun Punk”. I’ve also been toying with the idea of bringing a few western bands I grew up listening to over here to Moscow with SFC opening for them. If that happened I would consider my life complete, haha! Let’s wait and see! 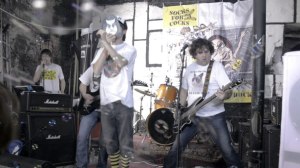 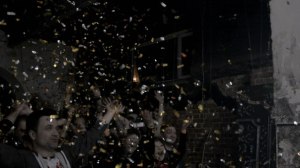 If you look up our live vids on YouTube, you’ll see that a SOCKS FOR COCKS gig is an experience to remember.
What’s in store for Socks For Cocks in the future?
In Russia there’s a superstition not to talk about the future for fear of jinxing it. When you talk about the future, you always gotta add “God permit” or something along these lines. So this coming June, God permit, SOCKS FOR COCKS will be featured in fucking TERRORIZER!!
And finally, any advice for people who want to become musicians?
Play it old school!

A huge thank you to Dima “Rotten” Danilin for doing the interview, and also to Lawnmower Deth Pete for contributing to the interview its very appreciated.

38 thoughts on “An Interview With Socks For Cocks”