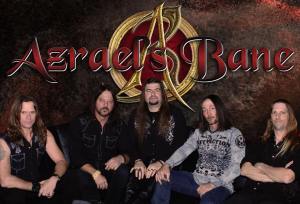 I have been listening to this album for a while now, to get a feel for it, and it is a brilliant album, as I have listened to it a good few times. Modern Day Babylon (2009) is a 2 disc reissue which has been remastered with Wings Of Innocence (2005), and released as a double album.

First part of the album.

The first track off the album is Save Us All is nice and heavy song, with riffs galore and some really cool drum work. Breathe is a good prog and ballad song, with some powerful vocals and good musicianship.

Brother (Never Meant to Last) from the start this is a very strong song as the riffs start from the beginning and with some brilliant drums and rhythm guitar,, this a good song from start to finish.

Shades of Memory, is a slow song, this song reminds me of  Marillion of the 90’s, it combines acoustic and electric guitars very well and it also has some pretty cool riffs, I would highly recommend that you listen to this track, as you will not be disappointed in this song if you really like a riff driven song.

The Forbidden. What a song, I could listen to this song all day, everything on this song, the guitars, drums, bass, vocals everything and it screams at me, saying “You must listen to this”, and it has went straight on to my playlist.

Carry On (Jerry’s Song) this is a cool song, and heartfelt. This song is about the good dying young and the people who are left behind, missing them.

Seclusion, it might be slow, but it has really powerful vocals and some pretty nifty riffs which I do enjoy on this track.

Send Me reminds me of some of Metallica’s early works, as in the structure of the song especially at the beginning of the song and then bang, it goes in to a riff roaring spectacular.

Damian is a song that is bordering on Speed/Thrash genres of metal, and this will appeal to those who do like Thrash metal and this is another song that has gone on to my playlist.

Edge of Thorns at the beginning of this song there is a piano solo that is very reminiscent of Mike Oldfield’s Tubular Bells and/or of Paganini’s 24th Caprice, and this sets up this song brilliantly, as this song is nice and heavy and any self respecting Rocker/Metaller would enjoy this track.

Second part of the album.

Shine is a good start to this second half of the album, as this song is a nod to Iron Maiden and other NWOBHM bands and yet another song that is going on to my playlist as it has some brutal drums and mental guitar riffs, and it is a proper metal song as it is at a proper length of over 6 minutes.

Innocence is one of heaviest tracks on the album with the unrelenting guitars, this is a Heavy Metal classic in the making right here, you got to listen to this song at full volume just to get the appreciation for the track.

Rainbow’s Edge is brilliant as it consists of some awesome musicianship and vocals. Chasing A Memory, is reminiscent of Judas Priest and with touch of Maiden on the guitars and on the vocals, and it is a brilliant combination.

Azrael’s Bane have taken a lot of rock and metal genres of the 1980’s and they made the song Foolish Pride an awesome track to listen to. As I am writing this, I am listening to the album again and Saving Grace comes on I am really impressed by Azrael’s Bane, they are fast becoming a firm favourite of mine as they are musicians of the highest quality.

Waiting is a good track, that you can put on in the car and turn the volume up, as this is a perfect driving anthem. Silence is one of those songs that you can chill out to, and still has the riffs that will tell you that you are still listening to Azrael’s Bane.

Mercy is a track that Azrael’s Bane must of been influenced by Motley Crue when they wrote this song, as is a really good song. Psycho Serenade is a riff-tastic, with bass and drum working well together to make your brain explode with their pounding energy from start to finish.

Lie To Me has got that up tempo sound to the track, which gives credence to be a good track for the car on a long journey. Saints And Sinners is a track that has hints of Black Metal, especially on the guitars and drums, and it also the track does have that thrashy style to it in places.

Diary Of A Madman, is a really good song, as this has some awesome guitars and and drums going all the way through the track.

If you like your riffs that are fast and loud you are going to love Azrael’s Bane and the Modern Day Babylon double album. This album will appeal to a lot of rockers and metallers alike.

I would give this band a 5 out of 5 as this is a brilliant album, and i would love to hear more from this band, whether it be a new album or on tour.